Skip to main content
Please note that while we anticipate running some 2021 DukeEngage programs, COVID-19 restrictions have delayed site development. We are currently planning to announce programs at the beginning of January with an early February application deadline. (November 10, 2020)
President Brodhead Steps Down

When President Brodhead announced his retirement from Duke in 2017, several generous gifts were made in his name. Among them were two gifts to DukeEngage — one from The Duke Endowment to support the DukeEngage-Durham program and one from the Kenan Charitable Trust to fund “follow-up” service projects in North Carolina that build on students’ DukeEngage experiences. 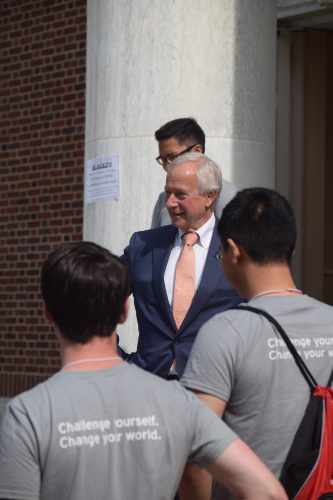 A Commitment to Durham

During his tenure as president of Duke University, which started in 2004, Richard H. Brodhead reinvigorated Duke’s commitment to Durham. Under his leadership, Duke’s investments have strengthened K-12 public education, funded several new community health clinics, and spurred downtown renewal and neighborhood revitalization through the Duke-Durham Neighborhood Partnership. His belief that Duke and Durham could and should work together to nurture a shared and prosperous community has helped Durham become the thriving city it is today.

In 2006, President Brodhead approved the creation of a one-of-a-kind experiential education program called DukeEngage. What began in the summer of 2007 as a pilot program with approximately 90 participants has, in the decade since, become a signature program of Duke University. More than 420 undergraduates now participate each summer.

At the beginning of each summer, President Brodhead was there to see the students off, with advice and well wishes at the Fortin Foundation DukeEngage Academy. (Watch a snippet of his 2017 remarks.) And almost every summer, he made time to visit at least one DukeEngage program in the field.

“Few experiences in my recent life have been as powerful as visiting Duke students in DukeEngage—young Duke engineers figuring out how to fix broken medical equipment in health clinics in rural Tanzania, or a young woman who, having studied Chinese at Duke, served as a teacher in a school for migrant children in Beijing. This is no extracurricular activity or summer pastime. This is education: a chance to learn the conditions of human life as they are lived outside the bubble of an elite American college campus, and a chance to discover how skills learned abstractly in academic settings can be applied and augmented in the world of human need.” – Richard H. Brodhead

In Honor of Richard H. Brodhead

In 2017, two $500,000 gifts were made to support DukeEngage in honor of President Brodhead, who stepped down on June 30, 2017. DukeEngage will use the grants from The Duke Endowment and the William R. Kenan, Jr. Charitable Trust to support two programs in North Carolina.

“I am thrilled that these grants were made in honor of former Duke President Richard Brodhead, who has been a champion of DukeEngage since its beginning,” said Eric Mlyn, the Peter Lange Executive Director of DukeEngage and the Assistant Vice Provost for Civic Engagement at Duke University. “I can think of no better way to celebrate his time at Duke and his deep commitment to the local community.”

The Duke Endowment committed $500,000 to support the DukeEngage program in Durham, which will be known as the Brodhead DukeEngage-Durham Program for the duration of the funding. The Kenan Trust committed $500,000 to fund the Brodhead Service Program, which will support new post-DukeEngage experiences in the United States, with an emphasis on projects across the state of North Carolina. The program is expected to launch in summer 2018.

“I’m deeply honored by these generous gifts,” said Duke President Emeritus Richard H. Brodhead. “Thanks to this support, Duke students will be able to deliver their classroom knowledge in service to the Durham community and integrate their DukeEngage experiences with their curricular learning. I’m grateful to The Duke Endowment and the Kenan Trust for their understanding of the importance of DukeEngage to a Duke education.”