Skip to main content
2023 programs to be announced/application to open in early November! Info sessions throughout October. Deadline in January.

“You are all part of the top 10 percent. You do know that right?”

An uncomfortable silence descends. We look at the ground, at the walls, anywhere but each other, because it’s true. As Duke students, we are bred, cultivated, destined even to be part of the top 10 percent. We are privileged beyond words, supported by friends, families, professors, and the system itself. Even this summer, my DukeEngage cohort and I are living in Audubon, purportedly one of “the best places to live in New Orleans” where the median home value is $926,500 compared to $188,600 in New Orleans overall. Don’t get me wrong – it is a beautiful neighborhood, and I feel very safe – but each afternoon as I ride the St. Charles streetcar through the Garden District to get home, I see and feel my privilege intimately.

We have spent the past hour discussing the state of the city with Jonathon Aronie, D.C. lawyer and Consent Decree Monitor for the police department here in New Orleans. As DukeEngage students, we came to the city with the intent to help – to contribute to the slow rebuilding process following Hurricane Katrina and offer ready hands and minds to local organizations addressing systemic issues. For the past month, I have worked with the Louisiana Budget Project, researching and investigating paid family leave in the state.

In case you were unaware, the United States is one of three countries in the world that does not have a federal paid family leave program in place. It is the only industrialized country without paid family leave. Yes, in 1993, the United States passed the Family and Medical Care Act (FMLA) which offers up to 12 weeks of unpaid leave for workers to care for newborns and family members with serious illness. But, this program is woefully inadequate and seriously inequitable. Strict eligibility requirements combined with the fact that leave is unpaid ensure that only the wealthy and educated can feasibly take FMLA. In Louisiana, 65 percent of workers do not qualify to take unpaid leave under FMLA. As if that was not enough, low-wage workers are significantly less likely to have access to paid leave than their higher-paid counterparts. Only 6 percent of low-income workers in the private sector have access to PFL. 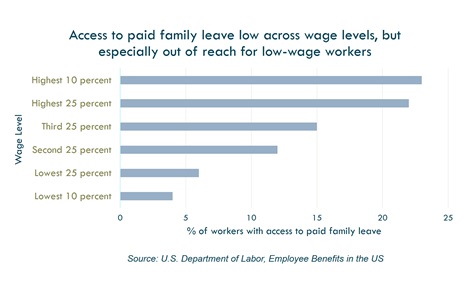 In Louisiana, 50.3 percent of households in poverty are headed by single women with children.

In Louisiana, women earn only 68 cents on the dollar compared to men. This is the highest wage gap in the country.

In Louisiana, median weekly earnings for women are just $659, compared to $863 per week for men in the state and the U.S. average of $832 per week.

In Louisiana, 23.1 percent of people live below the poverty line.

Our country prides itself as being founded on the belief that each and every citizen has the natural born right to life, liberty, and the pursuit of happiness.

Our country was once heralded as leader of the free world, carrying for so many years the title of haven for the tired, the weary, and the poor.

But our country’s leave policies do not reflect this mission.

Our country’s leave policies favor the well off.

Our country’s leave policies do not favor those who would benefit the most. They do not favor the low-income single mothers who work three jobs to provide for their families or the newborns who come into the world innocent and unaware of the systemic inequities, inequities that distinguish the babies who “deserve” the right to bond with their parents from the babies who do not.

Our country’s leave policies must change.

In my short time working with the Louisiana Budget Project, I have learned the importance of advocacy. So, I ask you, dear reader, to reflect. Think about this. Look up paid leave in your own home state. Research the wage gap between men and women. And if you feel compelled, call your local congressmen. Your voice has power. Use it well.