I’ve never been in a house with no floors. That is, I had never been in such a house until I visited the coastal fishing village of Playa Blanca in northern Peru.

I traveled there with WindAid to install our 500-watt turbine in a house for a family that didn’t have lights. I didn’t know what to expect. The trek itself was its own mission. We were 12 volunteers packed into a van with all our supplies and a metal crate that held the turbine. We drove for 5 hours on a single lane road through a desert north of Trujillo before coming across a vast lake formed by the recent floods caused by El Niño.

After hopping in a small boat to ferry us and all our supplies across the water, we got into another van to drive us the remaining two hours to Playa Blanca. From the distance, we could see over 20 turbines spinning proudly in the wind. They were attached to these tall wooden polls and powered the houses of the community. They served as vestiges of previous WindAid excursions, as Playa Blanca is their oldest community partner. We arrived at the town just in time for a purple sunset. A crowd of small children swarmed our van and helped us unload our supplies.

We stayed in a one room shelter that was constructed from four wooden walls and a makeshift roof made of straw that offered no protection from the weather. That night, I slept outside on a cot under the stars.

In the morning, I went with two other volunteers to dig the hole that would hold the pole of the turbine in place. It was up to the family to provide the concrete for the support. While we dug the hole, other groups were working inside on installing the wires for the electrical system that would power the lights in the house. 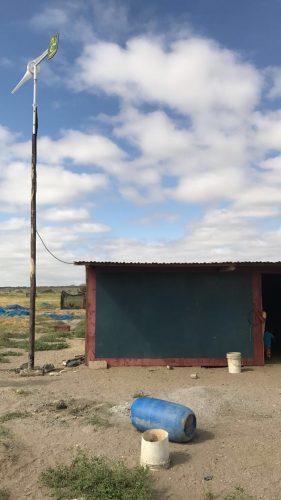 Because WindAid has been working with Playa Blanca for so long, they have gotten to the point that every house that wanted a turbine had one. Because of that, when we arrived, we needed to go around the community asking who wanted to have a turbine installed in their home. We didn’t receive the enthusiasm we expected from the community, but I came to understand the source of the general disinterest.

The turbines are donated to the families for free, but they are still charged a sol a day for maintenance fees, which is about 30 US cents. To some of the people of the fishing community, this may be too much to keep up long term. It didn’t help that the floods devastated Playa Blanca earlier in the year. For a week straight, the people had rivers of water flowing through their homes. The dirt roads were destroyed, and with all the fresh water running into the ocean, the fish in the area fled the bay.

This created huge adversity for the fisherman as their main source of income and sustenance suddenly vanished. For two months, the town was receiving cans of tuna as aid from the nearby city.

Life in Playa Blanca was calm, but it was hard. It often seemed that the people in the community had bigger problems to worry about than having lights in their homes. Despite that, the warm welcome we received from the community was enough to validate our presence there, and the thought that the kids would now be able to do their homework after dark comforted us.