Every evening, the sky above A Mountain erupts in shades of pink, orange, and gold. For two months, I marveled at Mother Nature’s nightly masterpiece. As I watch the sun sink below the desert horizon one final time, I reflect on my summer in the borderlands. 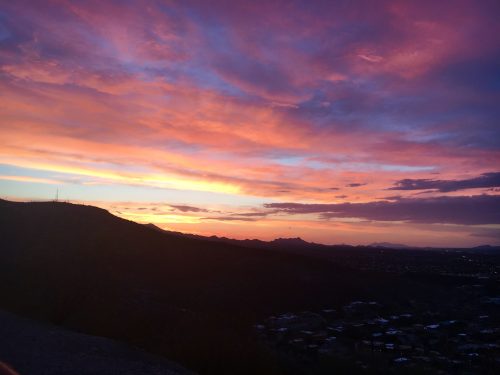 Immigration in this country is not a policy issue for media networks and politicians to toss around loftily; it is a full-blown humanitarian crisis and a systematic violation of human rights. US-backed governments in Latin America worsen conditions in those countries, which is a major cause of migration to the United States. Folks from Latin American who want to enter the United States “legally” have to wait up to 20 years for their applications to be processed. When they have no choice but to come “illegally,” most of the US-Mexico border has been closed off, forcing many of those fleeing to the United States for their lives to cross through an extremely dangerous region of the Arizona desert. Even if they survive the treacherous journey, they live in fear of getting caught by police, ICE or Border Patrol. Without papers, a routine traffic stop can lead to a criminal record, time in a detention center, and deportation. Immigrants in the United States are seen and treated not as humans, but as commodities or liabilities.

It is important to note that this is not new under the Trump Administration; it happened under the Obama administration and under numerous presidents before him. What’s more, media and news networks across the political spectrum are denying platforms to those most affected.

So who is going to stand up for immigrants and their families? Who is willing to sacrifice their social position in our precious American hierarchy of prejudice and inequality? Who gives voice to those who are told their voices do not matter?

After two months, it is clear to me that the communities who are most affected by these issues are the ones leading the charge. One of the most important lessons for me to learn was that there are no better people to lead the fight against injustices than those who directly experience them.

The activism community in Tucson is unlike any other community I have encountered. It is an interconnected network of grassroots organizations run by incredibly compassionate people. All of the organizations that had DukeEngage-Tucson interns this summer are somehow connected to one another.

The strength of this community was particularly evident to me during a solidarity dinner at Casa Mariposa during our last week in Tucson. Casa Mariposa provides support and a safe place to live for folks recently out of detention centers. They are losing their house in September, so they host biweekly dinners to fundraise for a new house. About 50 people were at the dinner, including residents of the house, community members, and members of different immigrant-focused organizations. Casa raised $1,300 for their new house at the dinner. Coming from a Duke environment where everyone is focused on their own goals and priorities, it is refreshing to see people investing resources and energy into causes that might not benefit them directly.

I spent every weekday morning of the past eight weeks with Jair at the Southside Worker Center, a day labor center that connects workers with fair-paying jobs. Our job was different depending on the needs of the day. Most days involved orientations for new workers and creating ID cards for long-term members. On some occasions, we were tasked with marketing fundraisers on Facebook, writing letters for immigration judges validating a worker’s membership with the center, or even cutting holes into 500 plastic flyers with a box cutter.

While the Worker Center is first and foremost a place for workers to find work, I have seen that it can be much more than that. It provides a community of support and personal development. Workers develop their English skills and learn how to navigate the laws and working conditions that are stacked against them. When a Worker Center member is detained, the entire center comes together to get legal assistance, write letters of support, and raise money to get them released from detention.

Our program coordinator Ana once told us that one of the most important things you can do when supporting a community is to give them agency. The Southside Worker Center has been giving day laborers agency and taking back power since 2006. It was an honor to be in that space and to contribute to the Center’s mission.

Tucson is not the most glamorous DukeEngage program; we did not visit any famous landmarks or spend our weekend nights out at bars or clubs. What we did do, which I found really valuable, was really live in Tucson. After just two months here, I know Tucson much better than I know Durham, even after two years at Duke. I got familiar with the bus system, explored different neighborhoods of the city, became a regular at the YMCA, and spent my stipend 3 times over on food (I went to 33 different restaurants, cafes, and ice cream shops in Tucson—I counted). Unexpectedly, Jair and I also became good friends with some local Tucsonans who showed us the city from a local perspective. While I will not miss the 110 degree temperatures, Tucson’s quirky culture and friendly people now have a special place in my heart.

I have learned so much, but I leave Tucson with the understanding that I have so much left to learn. As overwhelmed and frustrated as I am by the crushing weight of policy and rhetoric that oppresses and marginalizes immigrant communities, I am equally inspired by the people and organizations on the front lines, fighting against the injustices system and making their voices heard.

First, I need to take what I have learned back to Duke and my home community. This narrative is not one we are exposed to outside of the borderlands. Then, I need to decide how this summer will influence my development and perspective. I have pushed myself out of my comfort zone, realized how complicit I am in oppressive systems, and learned tools to use my platform and resources for justice and resistance. I can not let myself forget the past two months as I move into the second half of college and the world beyond it.

As I leave Tucson and the sun rises on my next adventure, I feel changed, grateful, and ready to work. Just because there is a long way to go does not mean we should not push forward as fast as our hearts and minds will let us.