Skip to main content
12/21 DukeEngage update - programs will be announced and the application will go live on Monday, February 15th.

The past few days at dinner, Leo has tried to probe deeper into my beliefs and what life in America was like with questions such as this. Yesterday, he told me that his English teacher taught that in America, if two men or two women held hands, you automatically knew they were gay/lesbian (he couldn’t pronounce lesbian, and instead said something more along the lines of “lesby”). I thought about it briefly, and he wasn’t wrong. I never gave this much thought in the past, but I then recalled seeing students of Zhuhai No9 middle school, hand in hand, as they walked to and fro. This strange phenomenon had always intrigued me, as it seemed so foreign. Even the best of friends in America didn’t hold each other’s hands. Sure, they liked bodily contact and such, but holding hands was weird. In the Chinese culture, I now assume, it’s normal (at least for middle schoolers). He then asked me about my opinion on sexuality, and then proceeded to tell me that there were very few gays in China. I didn’t have the energy to question his statement, and so it stood.

Having been raised in a Chinese household by Chinese parents, I was used to being told not to do such things as drinking cold water while I ate, exposing my head to cold air while sweating, and other such oddities. I distinctly remember how my mother used to make me and my brother cover our heads as we walked out of our after-school program, having just ran around in the gym for hours, to the car. I recall my father telling me that air conditioning isn’t natural, that we should all just live life sweating and getting rid of toxins in our body, and that we are now spoiled by AC. I remember never really understanding what it meant to “shang huo”, but that it happened when you ate too much fried food, chips, etc.

Half of my team members were raised similarly, and I assume they had been scolded as well for not obeying these rules. The other half, however, were raised by non-Chinese households. They were now hearing these for the first time upon arriving here, and to my amusement, I see that most of them don’t believe these have any truth behind them. Some of them continue to stand right in front of the air conditioner in our office to cool their heads, or buy huge jugs of ice water to bring back to their host family. I will admit, however, that I love to drink cold drinks while I eat, and would probably just sit around like a potato if not for air conditioning. I genuinely believe in the authenticity of these statements, however, and I don’t know if it was just because I was raised to believe them, or if it makes sense scientifically/logically in my mind.

The contrast between me believing in these, as opposed to some of my team members thinking little of them, has made me think of myself in a different way. I know it seems completely random, but I feel more tied to my heritage and Chinese ancestry. It makes me feel a strange connection to China that I haven’t before when I visited in the past. Not only thinking about how science backs up these seemingly random allegations by Chinese people, but just truly trusting that the way Chinese people live is healthier helps me to feel more comfortable living in China. I feel as if non-Chinese people are missing out by not trusting in these statements, but they are free to live how they want. I’m not sure if all the gibberish I said made sense, and I don’t think I properly expressed my feelings, but I tried my best.

On a lighter note, a few days ago, I looked at our program calendar. Considering the time we have yet to spend on excursions and fun trips, our team has almost no time left here in Zhuhai. We basically are done with teaching, and it had not hit me until a few days ago how fast the time had passed and how little we had left. Thinking about much more I want to do with my host family and brother, and how little time we have makes me long for more time here. I really love some of my classes, as the students have all been becoming more comfortable with making mistakes when speaking English (and a lot of them are really cute. I mean this in a non-creepy way, although I was often told this past year at Duke that I like to creep on my friends’ younger siblings in a really weird way).

I also went to the Ocean Park, and I was very impressed. We stayed until night, so we could watch the fireworks, and I honestly thought that I had already seen enough fireworks and that this show probably wasn’t as good as the ones at Kings Island (shoutout to Mason, OH!!!!). I was wrong. Completely and utterly wrong. Chinese people don’t put on firework displays. They put on flare-fire-jetski-waterjetpack-firework extravaganzas. There were fireworks, fire spurts that made me start sweating more than I already was, and people flying around in the air with the aid of water shooting out of their feet. It made up for the fact that I spent the second half of our time there with soaked underwear and pants because of that stupid mountain water ride and my broken poncho.

Although we are leaving for Shanghai tomorrow, I haven’t packed yet and a lot of my clothes are covered in sweat and grime. The week has been fun, and Aditya continues to like his Durian. 我觉得很奇怪. But oh well, you do you, man. Daniel out. 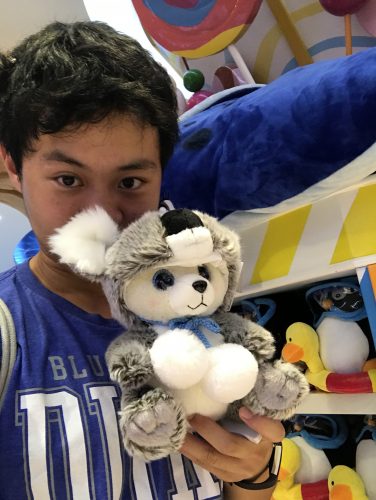 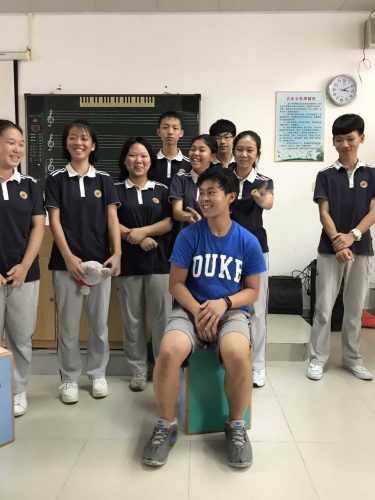