Under the direction of Program Director Fred Boadu, Associate Professor of Civil and Environmental Engineering at Duke University, and Site Coordinator Bruny Kenou, Duke students partnered with University of Cape Coast students and met with over 290 mechanics. The first phase involved a survey of the mechanic shops to learn more about their health and their practices for handling used motor oil. One student reflection describes their first impression of the shops:

“Today we visited our first mechanic shop in Ghana. I was surprised at how large of an operation it was, the place was more like a large mechanic hub rather than the individual small shops I was expecting. We saw small shacks set up like departments with different people at each one, specializing in different components. There was a store selling oil, another shack that was full of brake discs, one with sewing machines dedicated to seat repair, a group manning the scrapyard, etc. Within and around these shops were more general mechanic shops with masters and apprentices, that worked on all parts of the cars from welding to oil changes to maintenance. There were parts and scrap everywhere, the environment had so much pollution that the river shore likely had more plastic bottles than grass. The animals in the area included a goat eating a plastic bag and a chicken stained black from oil. The noise was considerable, there was a lot of hammering, welding, and other work happening. There was a noticeable lack of sounds from machinery (besides cars), which made sense once I realized there was no electricity in this area apart from a couple generators scattered around. There were lots of smells, including burning fumes from some welding, and a smell of oil and trash near the river.” 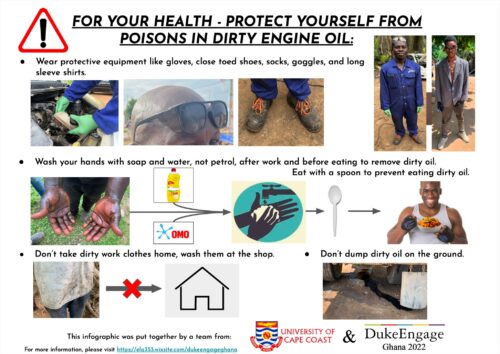 At each of the shops, students presented an hour-long educational story followed by a Q&A with the mechanics. The purpose of the educational story was to inform mechanics of the harmful effects of used motor oil on human health and the environment and to provide strategies to improve handling and reduce exposure. Students shared reflections from their conversations with the mechanics.

“While completing telling the educational story, there were a couple of comments and questions that stumped us. For instance, one mechanic told us about how they initially store the used motor oil in containers, but they often get knocked over by people or cars. Also, storage space and containers aren’t as easy to come by. Therefore, they tend to just dump the oil directly onto the ground. We didn’t have a great answer for them because an ideal solution—putting the oil into sealed containers and removing it from everyone else—wasn’t as feasible as we thought. Although our main goal for the visit was to educate and make them aware of the dangers of used motor oil, it was tough and even frustrating that we didn’t have a good or perfect answer for them. I think this trip has made me realize that those kinds of answers are not as easy to come by, and that incremental steps are sometimes the only possible solution in the moment, while waiting for more definitive solutions to come. We ended up answering that any container was useful, even like discarded water bottles, and that if the mechanics could designate a spot to hold them away from cars and people that would be ideal. However, if that wasn’t possible, we still recommended trying the other suggestions like wearing gloves and washing hands thoroughly. I was also amazed how common the health problems we talked about were, and it seemed that everyone we talked to had a story about illness from working with oil.” 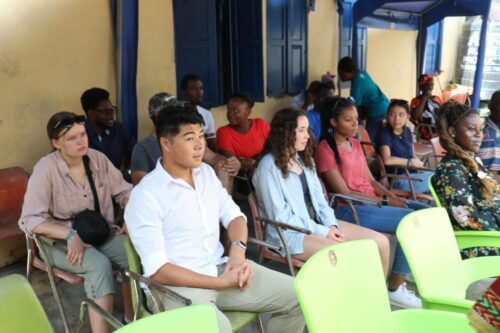 Apart from their work at the auto-shops, students also participated in several cultural and historical excursions, including a visit to Elmina Castle. Now a UNESCO World Heritage Site, Elmina Castle was built by the Portuguese in 1482 and later seized by the Dutch, serving an important role in the West African slave trade. Students reflected on their visit to Elmina, and how its history shapes the town today.

“Learning about Ghana, one usually hears about cities like Accra, Kumasi or Cape Coast. It was very interesting to learn about Elmina and its sparsely spoken importance in the history of Ghana. Elmina was the previous capital of Ghana and also the first point of European contact in Ghana. The European past of Elmina is present in the various castles at several hillpoints strategically scattered across the city. It is also evident in some of the names of houses or locals. For example, the last name of one of the senior chiefs we met at the palace is Van Dijk, a name of Dutch origin. According to the professor who gave us a tour of the castle, the European influence can also be seen in dowry. Dowry paid by Elmina locals who want to get married usually includes Dutch produced alcohol and Hollandis clothing fabric. From a more general perspective, as it is with the arrival of Europeans in other parts of Africa, the beginning of Elmina brought about the spread of Christianity along the Gold Coast.” 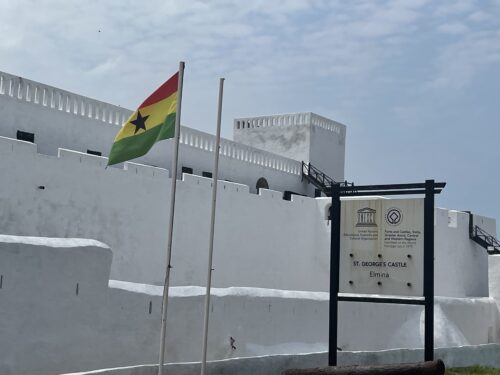