Skip to main content
Second Round Applications Now Complete -- Notifications will be Emailed on Feb 14th!

We are past the midway point of our DukeEngage-Costa Rica experience, and we have less than three weeks left of our trip. Because of our hectic schedule, we weren’t able to get a post up last week, because of that, this one will detail what we have been up to these last two weeks.

We last checked in as we were beginning our work in the lowlands, and let me tell you, it was exhausting. The heat was absolutely brutal, as even sitting down somehow made you sweaty, and the large population of mosquitoes made us paranoid that we would all get Dengue. However, the uncomfortable heat and abundance of bugs were worth it because of where we were staying.

La Ensenada is a sprawling property covering roughly 1000 acres. The hotel area was clustered near the coast of the Gulf of Nicoya, and came complete with, comfortable cabins, nice hiking trails, and excellent food.

Four of the five work days were dominated by planting trees, and, by the end of the week, we got over 600 trees into the ground. The community partners that we were working with were extremely varied, from wealthy landowners like Don Vargas, to the remote and impoverished community at la Costa de Pajaros. And, as we mentioned in the previous post, landowner values, and how they approached reforestation, were varied as well.

Katie Powlen and her survey were instrumental in documenting these different viewpoints, and many of us were able branch out in groups, carrying out interviews on our own. Fabian Jimenez, Shom Tiwari, Harris Rooney, and Anna Balas in particular were excited and active in completing these surveys and helping Katie get the data she needed.

Outside of planting trees and conducting interviews, we went to a workshop held by CORCLIMA (a local environmental organization), that was held to discuss the objectives for, and obstacles to, reforestation in Costa Rica. There were various conservation and reforestation groups in attendance from the large to the small, and it allowed us to see the various challenges that these groups face, such as fires, lack of funding, and bureaucracy (though the rapid-fire Spanish was hard to follow).

The last aspect of our work in the lowlands was the construction of a tree nursery at Centro de Visitantes Asoc. de Mujeres Unidas de La Montaña de Coyolito (women’s center in the village of Coyolito). Though the work was pretty tedious, stuffing 300+ bags full of soil is only so exciting, the payoff was worth it as we left Saturday afternoon with a completed nursery with over 300 seedlings safely growing in their bags.

On Sunday, we had to say goodbye to La Ensenada, and we all squeezed into La Buseta to make the return trip to Monteverde. Though the drive was bumpy, the cooler climate in Monteverde was absolute bliss, and working in the field on Monday never felt easier.

For the last month of the program, we will be staying at La Calandria, a little field station that is a five minute walk from the tree nursery of the same name. All twelve of us are ecstatic with our new accommodations as the rooms are cozy, the food (as always) is fantastic, and the Wi-Fi is now accessible from our rooms!

Last week was defined by three things: Working with Ron Reuter, meeting Meredith Casper from DukeEngage office, and our 4th of July celebration.

The majority of the work week revolved around our work with Ron Reuter and his Oregon State students as they sampled the soil at various sites where trees had been planted in the past. When looking at soil, you always start with digging into the soil, either with an auger to quickly obtain a soil core, or with shovels to open a pit for more detailed examination and sampling. Getting a view into the soil is important because the growth of most trees is limited by the quality and depth of soil above the hard clay layer. More specifically, we are measuring the depth and color of the A-horizon (the dark-colored layer with carbon-rich matter), as well as the depth at which the clay layer begins.

Though the end goal was to create a soil map that could be used to identify the best sites for reforestation, Ron and Co. found that the soils were so varied at each site that it would be next to impossible to make a usable map (which is exciting in its own right).

On Wednesday, Meredith came out into the field with us and she got to learn all about our awesome work here. On Friday, she actually helped us plant 70 Cirri Armarillo (Mauria heterophylla) at Finca Rodriguez in order to measure growth rates on sloped vs. flat land. And, after we gave her a killer presentation summing up everything we’ve done thus far, she took us all out for ice cream from the cheese factory in Monteverde.

And finally, the 4th of July celebration. We all showed up to work with red, white and blue beads on our neck and our usual passion for tree measuring. After work, we got to cook up some burgers and hot dogs in classic American fashion and then played Mafia as a group. Though it probably wasn’t the most exciting 4th of July celebration, I know for a fact that we all had a blast.

This past Friday, we left to take a trip down to San Jose to experience a different side of Costa Rica. Our visit coincided with FIA, an art festival that was taking place across multiple parks in the downtown area and we were able to look through all the amazing crafts from local artists. We were also able to stop by the Feria Verde de Aranjuez (the famous farmer’s market), the National Museum of Costa Rica, the Pre-Colombian Gold Museum, and the Jade Museum. On Saturday night, we went out for dinner at an amazing restaurant called Tenedor Argentino (shout out to Eudora Miao for choosing it), where we all got to bond over a delicious meal.

On Sunday, we returned to La Calandria, brains loaded with Costa Rican history and culture, but ready to return to the mountains and transition into the next phase of our program.

Just as our lodging has changed for the last month, our work will also shift from planting trees to a more research-based approach as we gear up for our final project. We are hoping that, in these final 3 weeks, we will be able to write up a report that will measure the integrity of a secondary forest that was planted 14 years ago. 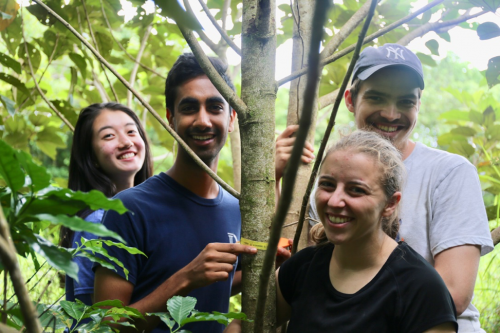