The DukeEngage Communications team sat down with David Schaad, Professor of the Practice of Civil and Environmental Engineering, to discuss his years-long involvement with DukeEngage and his new program in Indonesia. Professor Schaad has led multiple DukeEngage programs, including a pilot-year program in post-Hurricane Katrina New Orleans and a watershed management project in Durham and Beaufort, North Carolina. He has also led international programs in Bolivia, Honduras, Peru, and Uganda.

I’ve been doing DukeEngage since the pilot year in 2007. We did a project in New Orleans that year, and every year I look for ways to partner with DukeEngage because it gives students such great opportunities for engagement and experiential learning.

I’m also the faculty advisor for Duke Engineers for International Development (DEID), a student group that works with local partners to address identified community needs. We’ve partnered with DukeEngage at different locations. We finished up our project in Uganda last year, and started transitioning to a new program this year. It’s with a community partner that we’ve connected with previously in Indonesia, and I thought it would be a great transition from a structural project to a global health/water and sanitation project. We’re really excited to do that with DukeEngage. The logistical support they provide, as well as the institutional backing and the training, is all just so fantastic.

We’re doing these projects with the community, not for the community. The goal is to leave a tangible product behind. In the past we’ve built vehicular bridges and school buildings in Uganda, a water system in Peru, a clinic in Honduras, and pedestrian and vehicular bridges in Bolivia. This year we [planned to do] a sanitation system in Indonesia, which [would] hopefully be used by the community to improve the water quality in and around the river and the adjacent locale. 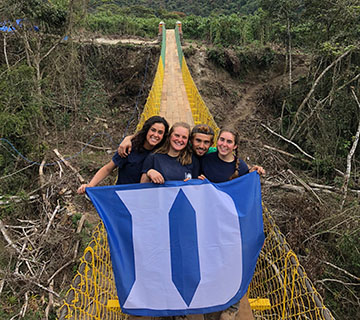 What do you hope students will take away from this experience?

Something Duke President Richard Brodhead said a couple years ago was that, as students progress in their careers academically and just as people, they tend to get into smaller and smaller bubbles where they don’t see very much different than themselves.

The goal of DukeEngage-Indonesia is for students to understand the way that water sanitation is done globally. Most people don’t have the same benefits as we do. To understand that, students partner and work alongside these wastewater engineers and community members who, on a daily basis, have to deal with these issues that we just take for granted.

How does this program align with and impact your research or teaching?

I’m a professor of the practice, so I don’t necessarily do research. But I do have a focus on sustainability and how we connect with and think about the people who live in the majority of the world that is different than us.

I am also the director of the Thomas C. Katsouleas National Academy of Engineering Grand Challenge Scholars Program at Duke and the Global Development Engineering Certificate Program. These are kind of overarching programs that understand that it’s not just a technological fix to a water/sanitation problem. There are issues of structural inequalities when it comes to gender, socioeconomic status, race, and class. Engineers can’t just come at the problem from a technological approach. They have to look at it more holistically. DukeEngage becomes part of the experiential component for the certificate in Global Development Engineering and is part of projects for many of our Grand Challenge Scholars.

I’m also teaching Engineering Sustainable Design in the Global Community. It’s a service-learning class that’s cross-listed in the Sanford School of Public Policy and the Nicholas School of the Environment, as well as the Pratt School of Engineering. The students in it are designing the DukeEngage project that we [were] going to do this summer [in Indonesia]. They’re getting the academic content and theoretical components in the class, and then they’re going to be implementing the experiential parts in the field. They get to see as it moves from thought to thing, and that’s a really rich educational experience. As well as understanding the social, ethical, and contextual issues associated with working on site with community partners.

Any favorite DukeEngage memories or unexpected outcomes from previous programs?

Back in 2011, we were looking to launch a new DukeEngage program. We had just finished up the clinic in Honduras, and we were looking for a new site. I went to Uganda on a site assessment funded by DukeEngage to explore different community partners in Kampala and Western Uganda. I met the person from Bringing Hope to the Family, a community partner we worked with for a number of years in Uganda. Then I came home.

They had an orphanage in Uganda. My wife and I were foster parents in North Carolina, and we had never really considered international adoption. But after going there, we were like, “Well, why wouldn’t we adopt these kids? They need homes.” We ended up adopting two children from that orphanage. My two sons are from a connection that I never would have had without DukeEngage. So, that’s very personal story for me.

As far as student-focused stories, there was Greer Mackabee ’12 in Honduras. He designed—I think he was a sophomore—a water/sanitation system for a clinic we worked on with Dr. Dennis Clements from the Duke Global Health Institute. This was a rural clinic up in the mountains of Honduras, near La Esperanza. And Greer put together its design, and then he graduated Phi Beta Kappa from Duke. He went on to get his Master’s degree in Environmental Engineering and his law degree at Stanford. Now, he’s putting together huge renewable energy projects in Washington, DC. He started small and then—of course I’m not saying that it was just the DukeEngage experience—but DukeEngage fosters this kind of understanding, this trajectory and sustainable thinking with a personal connection.

Who else? Caroline Horrow ’16 was in Uganda. She basically had her whole four-year trajectory mapped out. Then she went on DukeEngage-Uganda between her freshman and sophomore year. And [her plan] basically kind of switched. She’s in bioethics now, the whole intersection of how we think about things from an ethical perspective within the context of medicinal delivery. She actually went back to Uganda another summer* and she was a DukeEngage Academy Leader (DEAL). So, again, here was a really amazing student who kind of shifted directions because of their DukeEngage experience.

[* In 2014, Caroline used a Kenan Summer Research Fellow to return to Uganda. Her project followed service groups and explored how effectively they are trained and how well that training translates into awareness and implementation.]

Eunice Leung ’16 took the class that I teach, Engineering Sustainable Design in the Global Community, and was a Grand Challenge Scholar. She designed a school in Uganda through DukeEngage and DEID. After leading the team which built the school with DukeEngage over the summer, she came back to Durham and did research on the way we mixed the concrete and its strength. Since Uganda is a seismically active region, she wanted to make sure that everything that we were doing [was safe], because we were mixing by hand. It was very different from learning about concrete in class. And now she’s designing skyscrapers in New York. 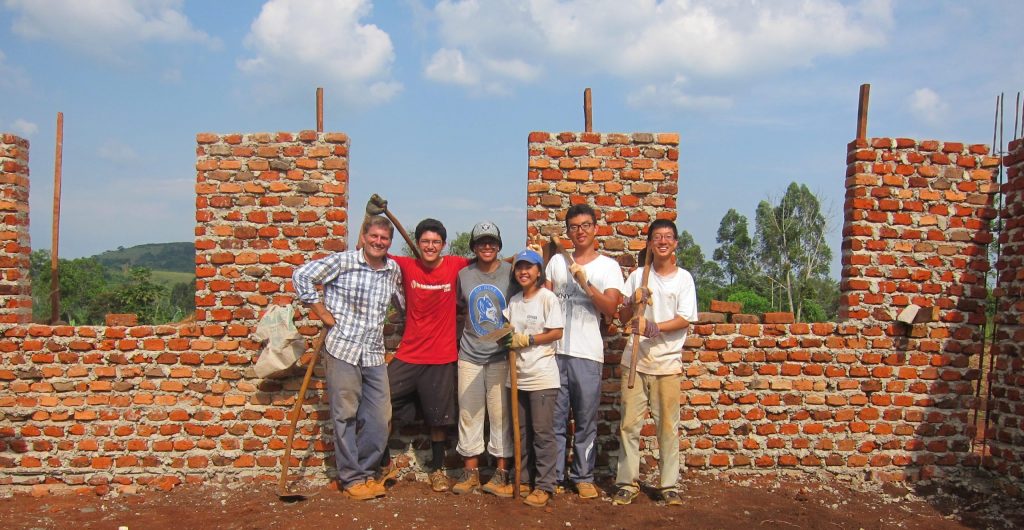 I could just keep going. The students are amazing and their participation on DukeEngage teams is really self-selected; students have elected to come on this particular program and do this particular thing. Which is hard. Usually it’s really hard. They’re living in the country and it’s challenging both emotionally and physically. And they rise to it and exceed all my wildest expectations.

So, it’s very exciting. And then, of course, hearing from them 5 or 10 years down the road is really neat. I know students that have been out of DukeEngage for 13 years now. Some of them have come back to work with me as site coordinators for DukeEngage programs. And then to watch their careers progress, see them having kids, and see the way they’ve chosen their vocation and avocational interests. Again, I’m not saying this was strictly because of DukeEngage, I recognize it’s because of the student; the people they are. But they selected to do this kind of an experience, and [then] integrate it very holistically into their lives.

And what are you most excited about for this summer in particular given all of the previous years?

Each year is a new year and a totally different experience. I haven’t been to Indonesia since the tsunami devasted the region over a decade and a half ago. I mean, I went immediately after the tsunami and was doing livelihood restoration work. But I haven’t been back to Indonesia since then. And so, I’m really excited to be back there doing a water project. We’ve done a lot of structural projects recently, but am looking forward to a water and global health project and I think it’s going to be a really good group of students. So, I’m excited to work with them.

Has DukeEngage changed you? And if so, how?

Yeah, I think DukeEngage has [changed me]. You really up your game for sure.

What are you going to miss most about not running DukeEngage-Indonesia this summer?

I am going to miss being with the students and the community, and watching that symbiotic flow of knowledge, empathy, and connection. I became an engineer to help people and to make the world a better place. I will miss the opportunity to do that this summer, and will miss leveraging a tangible project that will benefit the people of South Kalimantan.