The DukeEngage Communications team sat down with Christine Folch (Assistant Professor of Cultural Anthropology at Duke), one of the faculty directors leading DukeEngage- Brazil and Paraguay, as part of a series of interviews that aims to talk about DukeEngage programs and their impact on community members, partners, and students. Follow us on Instagram for more content like this!

The research that I’ve been doing in Paraguay around Itaipu dam, which is the world’s largest hydroelectric dam, allows me to be a member of the Energy Initiative as faculty. The Duke Energy Initiative wants to think about how to engage undergraduates in research experiences that center on energy. I’ve brought smaller teams of students to South America to do energy research because of that.

Luana Lima, who is also inside the Energy Initiative, approached me to brainstorm our project together around Itaipu dam. Luana is Brazilian and she’s an energy expert. So, the idea was to think about a project that centered on questions about the hydroelectric dam as a way to think about how to help students not just engage with DukeEngage, but engage with the Duke Energy Initiative. So that’s one way into that question.

So, I have always had a love for and a commitment to the kinds of projects and the kinds of questions that DukeEngage centers. From the very beginning of my time at Duke- this is my fifth year here- I wrote for some funding support to be able to bring undergraduates with me onto my research site. So, in many ways DukeEngage is just a natural evolution of the work that I’d already been doing.

What do you hope students will take from the experience?

In the past, I’ve brought smaller teams of students, so two students: one undergrad, one grad. We were there for anywhere between a week to two weeks. That’s a much shorter and more intensive kind of trip than DukeEngage, not that DukeEngage is not intensive; but, it just meant that we did a lot of research work beforehand and those students were coming in on my research project. So, here at Duke, I launched a research project called Itaipu Post 2023. I’ve got a scholarly project on the dam, which has to do with the anthropology of infrastructure and the anthropology of energy, but because it’s the world’s largest hydroelectric dam and because it really matters so much, especially to Paraguay, I launched a more public policy oriented research project asking the question, “How can Paraguay think about this resource?”

So, I brought students into something that was happening. The DukeEngage program takes it to another level. Students are going to be there longer, so they’re going to have a chance to develop more independent personal relationships with people in the country. I think that, of all the things that DukeEngage gives students- amazing opportunities, learning, et cetera- the thing that’s probably most important and most life-transforming is the chance to form real relationships. An eight-week program can give the space for that. I’m talking with the person who’s site coordinating with me, who is a Paraguayan and has worked in the dam and in the government. We’re doing a lot of the planning together, and what we really want is for students to form relationships. We think that it’s in those relationships that substantive change can happen in Paraguay and for the students themselves.

With some of the structures that we’re designing, we want students to get to know and work alongside Paraguayan undergraduate students and to do research together. We’re putting together a workshop, an energy workshop, where we want to invite key leaders in the country to come and speak to the students. We want the output of that to be research, research that they develop alongside each other. They’re tackling the question of how to use energy for social development, but it’s not necessarily stuff that I’ve worked on. They’re going to be connected with different organizations and different individuals. So, we’ll see what comes up.

What benefit does your DukeEngage program offer the community/partners?

I think this DukeEngage Itaipu Paraguay has a real potential to be a game changer on the ground in Paraguay. The reason is that this is not a small issue for Paraguayans. They care a lot about it, and there’s a lot of potential in the dam to transform their country. So, it’s not like just our local partners care about it. Everyone in the country cares about it.

What Duke students can do, not just for community partners, not just with the students that they’re going to be meeting with and the peers and peer relationships that are going to be forming, not just with the organizations who are doing interesting development work that they’re going to get to know, but what they can do is get hands-on experience trying to show what the benefit of research is to questions of poverty, inequality, and development need. We have dreams of publishing the student research.

Paraguay is like many underdeveloped countries, it’s got a lot of inequality. It’s got a lot of resources that are not stewarded well, and the resources tend to float to the top of the pyramid. When there’s business development, often it can be unsustainable financially, ecologically, socially because it’s focused on the bottom line in a really narrow sense for people outside the country. We want to actually ask the question, “How can you do development that is sustainable and socially and ecologically responsible?” We think that that matters. We think that if we show what research brings to the table, it’s not just going to benefit community partners that we work with. We think it has an ability to make an impact on the debate in Paraguay in general. We’re going to share our research in Paraguay. It’s not just like we’re going to have an amazing experience and come back to the US with photos for our Facebook feeds or Instagram. Our goal is to leave things there.

What benefits do you see for students and faculty in the type of experiential learning offered by programs like DukeEngage?

I think there’s so much here. There’s the pedagogical side of it. We learn better when we’ve got more senses involved, when we’re not just in the classroom, but when we’re actually having to gather data, analyze it in real time and thinking about how to communicate it. I think that students involved in projects like this get a real sense for what we do as scholars. It’s not just reading a book, but it’s seeing how this is put together and getting a vision for why it matters and why I could do it.

I think it’s really important to learn to cross cultural boundaries. Not just for a day, but to work across cultural boundaries. The only way to learn how to do that is through time. For students, I think something else that DukeEngage offers, not just outside of the US but inside the US, is the chance to cross boundaries and to have to learn how to work with them. Not only how to work in those contexts, but how to follow rather than lead. I think that’s super important. We’re so used to being leaders or to having the answers. I think you could just really look at global political economy and see that doesn’t work. It’s not just culturally insensitive. It’s actually just mathematically wrong. You can’t impose solutions. Those are structurally guaranteed to fail. The way to actually address these kinds of issues is through learning how to work in difference. I think that’s one major thing that DukeEngage offers students.

I think it’s also really important for students to learn multiple languages. So, one of the requirements for the Paraguay side of the trip was for students to speak Spanish. We conducted interviews in Spanish. There’s a Brazil side to this trip as well, which we’re really excited about, but the language requirement wasn’t as strong there because students will be working in a university context with researchers who will be speaking English. In Paraguay, people don’t speak English, so if you want to speak to anybody in Paraguay, and I think they’ll speak to many people, they need to speak Spanish. They’ll have an opportunity better that.

I can talk about what it offers me. I’ve been working on this field site for more than a decade and I really care. I think that it in any society, the most important and the most precious thing is its young people. The idea that a number of students applied and sought to work on this team is big; they wanted to go to Paraguay. Duke is sort of yielding its most precious resource, which is its young people and their families are yielding their most valuable thing, right? I think that there’s nothing more valuable than that.

To be able to have something so important as their time, hope, spirit, and intention is incredible. It’s six young people who are eager to get in on this. I just think I’m so thrilled for what that can mean for the work I’ve been doing in the past and the things I would love to learn about more and see grow and change on my field site.

What are you most excited about for this summer?

I am excited for at least two things. The relationships that are going to be built in the team. I don’t know what those are going to be like, right? They’re totally dependent on the chemistry of the individuals. I’m really excited about those relationships, and I’m really excited for six Duke undergraduates to see Paraguay in the blank slate that they are. I’m excited about relationships and I’m excited to see Paraguay through the eyes of creative, dedicated, committed young people.

Our program has a sort of a partner program in Brazil because the dam that centers and anchors our project is an international dam. We’re really excited about developing a pretty strong partnership with another group of DukeEngage students. They’ll be asking questions that are related but different because the context is different. Brazil is different from Paraguay. We’re thinking a lot more about policy and public policy. They’re thinking a lot more about energy and engineering. It’ll be really cool to see how this happens, how it’s not just like programs in neighboring countries, but programs that have at the center an object that is international. I’m excited for what that also means. 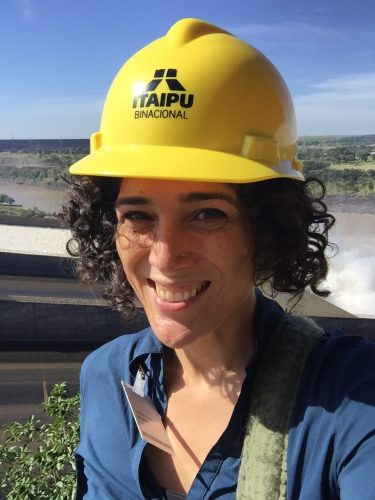