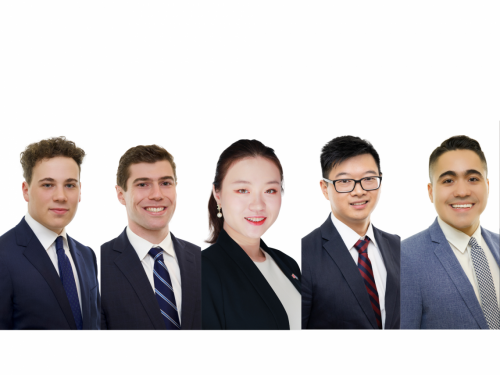 Five Duke University students and alumni have been named Schwarzman Scholars, a program that funds one year of study in Beijing, China.

Seniors Charles Berman of Durham, North Carolina, and Max Labaton (DukeEngage-Jordan) of Washington, D.C., were named Schwarzman Scholars. They join 2019 Duke graduates Yunjie Lai (DukeEngage-Detroit) of Chongquing, China, and Kevin Zheng of Glenelg, Maryland, and 2017 graduate Steven Soto (DukeEngage-Cape Town) of Phoenix, Arizona, as members of the Schwarzman Class of 2021. They are among 145 scholars chosen from more than 4,700 applicants worldwide.

The scholars develop leadership skills through a funded one-year master’s degree in global affairs, with specialization tracks in public policy, economics or international studies. Scholars are selected on the basis of leadership potential, entrepreneurial spirit and a desire to understand other cultures.

Students will study at Tsinghua University and live on the Schwarzman College campus, a newly built, state-of-the-art facility where classes are taught in English. The scholars will live in Beijing for a year of study and cultural immersion, attending lectures, traveling and developing a better understanding of China.