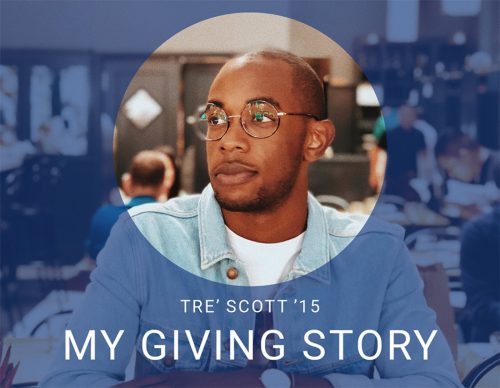 Tre’ has established the Tre’Ellis Terrell Scott DukeEngage Fund, which provides funding for students seeking to challenge themselves and change their world through Duke’s global civic engagement program, DukeEngage.

Tre’ participated in DukeEngage earlier than most Duke students. Friends from his living community in Pegram, the arts living experience for first-year students, started talking about the limitless potential for growth and the excitement the program offered. It was still relatively new back then. Tre’ and his friends were fascinated.

Then, the rest sort of came about organically. Through connections with Hsiao-mei Ku, a professor of the practice in music and the faculty-in-residence of Pegram, the students turned their focus to China with an independent project in mind. Ku’s older brother teaches in the region, and Ku herself is very famous in the music space of China, so the students used Ku’s wealth of knowledge as an advisor to make the most of the opportunity.

When Tre’ left for DukeEngage, he was only 18. While abroad in a very remote part of southern China, his eyes opened to a world he knew nothing about.

“I had never been out of the country before,” says Tre’. “Let alone, across the world. I didn’t tell my mom where I was going until a week or two before.”

He and his fellow engagers created an arts program for Chinese students in the vein of a Western-style classroom. It was open to creative thinking and problem solving, and had less call-and-response. The students loved it and were deeply engaged. What was difficult was doing this without speaking any Mandarin or Cantonese and being one of the few foreigners to ever visit the school.

Saying “Yes!” to this amazing opportunity has made Tre’ realize that giving similar life-changing experiences to others is something that resonates with him to his core. Always looking ahead to help others, he also recently joined the DukeEngage National Advisory Board to share his expertise as a program participant.

“DukeEngage is not just a world of service, or a world of civic engagement. It is a lesson in failure and a lesson in ambiguity,” says Tre’. “But it’s also a new world.”

In the home of Tre’s Chinese host family, the grandmother was the matriarch. She spoiled the grandchildren. The whole family shared dinners and quiet moments as a unit. In these experiences, Tre’ remembers realizing that his host family was no different from his own.

“For many of these students, this is the first time they are ever in a new place where they don’t speak the language, don’t know the culture and are truly foreigners. It’s in that difference that you start to notice the similarities.”

With Tre’s giving, he wants you to see what he sees: The world is ever-widening and our place in it is as big as the plans we make.