Nelson Mandela once said, “Education is the most powerful weapon which you can use to change the world.” As states around the country struggle to figure out how to educate students during the COVID-19 pandemic, we keep hearing arguments that reopening schools is justified despite the risks because education is so important. It’s true that education has the power to shape a person’s future, but in the debate over reopening schools, it’s easy to lose sight of the fact that for many children the education system is a profoundly negative, punitive force. As we talk about racial justice, public safety, and institutional change, it’s long past time to talk about the school-to-prison pipeline.

Between 1995 and 2010, the juvenile incarceration rate dropped 41% and rates of juvenile crime in America have fallen for decades. Despite this change, school discipline policies have become more punitive over the same timeframe. Out-of-school suspensions more than doubled since the 1970s, with the impact falling most heavily on minority students. The Department of Education’s Office for Civil Rights found that Black students are about three times as likely to be suspended or expelled compared to their white classmates. This is extremely consequential, as research shows that suspended students are more likely to be held back a grade or drop out of school, which touches off a cascade of consequences that can easily derail a student’s entire life.

It’s no secret that American public schools are underfunded, but it’s possible to view this as an isolated problem, rather than the root cause of much of our education system’s dysfunction. Without adequate funding, public schools often contend with the triple threat of overcrowded classrooms, a lack of qualified teachers, and insufficient educational resources such as textbooks, computers, and counselors. When you realize that the majority of funding for public schools comes from local government, which collects funding by property taxes, and combine that with the fact that generations of systemic racism have left vast swathes of the country segregated, you begin to understand how minority students often find themselves in underfunded public schools in neglected districts. Before the school year even begins, these students are at a profound disadvantage.

What happens next is a story that’s become all too familiar. Without the resources to provide for student’s needs and feeling threatened by an inability to control overcrowded classrooms, schools adopt zero-tolerance policies in a desperate bid to restore order to the system. For many students, zero-tolerance policies lead to their first run-ins with the criminal justice system, as children are suspended or expelled for minor offenses. Students with special needs suffer greatly, as underfunded public schools are more likely to harshly punish behaviors seen as “disruptive” to the general classroom, while also lacking counselors who could provide these students with the individual education they need.

This system creates a cycle of abuse. Education is an incredible tool that can change a child’s life, but too often the American public school system does the exact opposite. It’s time to invest in public education and undo the poor policies that have turned our schools into feeders for the juvenile justice system, rather than vehicles for giving students the resources and skills they need to succeed. 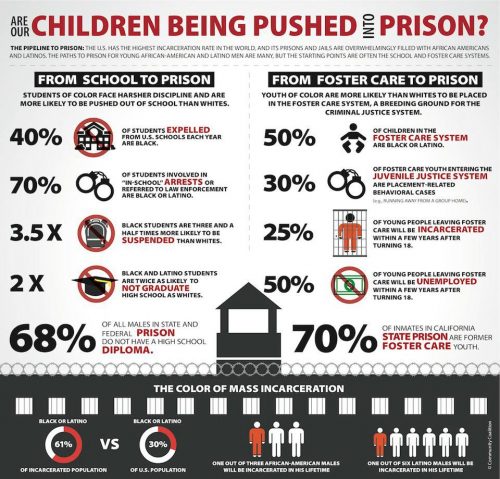