“The American Dream still exists.” During DukeEngage Academy, our cohort grappled with this statement, moving ourselves to stand by signs that reflected our respective viewpoints. While our leaders moved toward the “Agree” and “Strongly Agree” sections, all of us students stood staunchly under the “Strongly Disagree” sign. Naturally, discourse ensued but neither party yielded. Perhaps the definition of the American Dream is too deeply entwined in the fiber of each generation, starting with the Founding Fathers and leading all the way to me, the biracial daughter of an immigrant and a Navy veteran.

Over the course of my first two weeks in Seattle, I’ve spent ample time reflecting on the American Dream, especially during my hour-long commute to and from my workplace. According to Google’s best scholars, the American Dream “theoretically protects every American’s right to reach their potential.” At the Asian Counseling & Referral Service, I work as an ESL teaching assistant, food bank volunteer, and part-time farmer. That said, I interact with a wide spectrum of individuals every day, each person in a different stage of actualizing their own American Dreams. My encounters with the diverse community don’t stop at work—they’re engrained in each moment of my everyday routine.

Seattle’s vibrant population can be characterized by its stark contrasts—disparities that have been overwhelmingly present, even in my short time here. In particular, I’m all too familiar with the fracture between Seattle’s rapidly expanding population of the tech elite and the concurrently growing community of individuals forced into homelessness. As we discussed in our first reflection dinner, anyone can fall victim to homelessness. Gentrification is not a victimless crime. Until the city has proper rent control, adequate transitional housing, or a combination of both, some people’s American Dreams will still be to have a clean bed and a warm meal. If we define the American Dream as reaching one’s potential, then our entire schema is all wrong.

The Ford Foundation’s American Dream Score uses a variety of factors to assess how much of one’s individual success can be attributed to hard work rather than simple boosts from privilege. I scored 56/100, indicating that I’ve “had much more working for [me] than against.” For a better understanding of the metric, see the breakdown I included below. I can’t argue with the fact that I score pretty high on the scale of relative privilege, but I can emphatically posit that my wellbeing comes from the fact that I was lucky enough to be born into a life that set me up for success, with a healthy heap of hard work thrown in along the way. 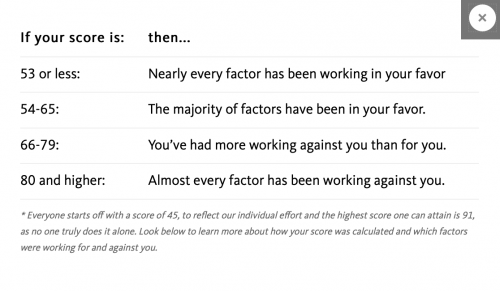 As a white-passing woman on a fully-funded DukeEngage program (not to mention the fact that I attend Duke), I inherently benefit from gentrification and subsequently have the responsibility of addressing it. Even though I recognize it as bad, there’s still some sort of cognitive dissonance, and I’m able to ignore my moral qualms in order to indulge my material sensibilities. My perceived sense of safety reaches its peak when I walk through quaint streets, peppered with boutiques and locally-sourced cafés. Conversely, that same sense of safety plummets when I walk through a neighborhood where buildings are more heavy-industry than industrial chic, and sirens can be heard more often than birdsongs. Even as a woman of color, I’m implicitly biased against communities of color—the very foundation of what makes Seattle such a beautiful and wonderful place.