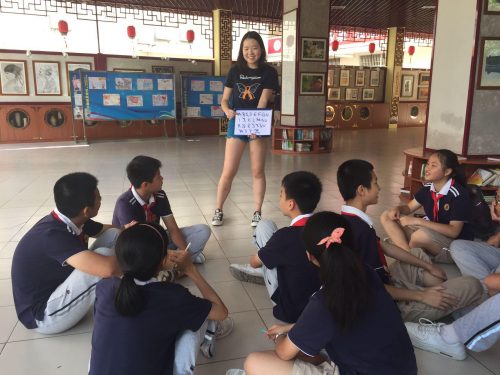 It’s crazy to think that we’re already halfway through the program and that I’ve been in Zhuhai for almost 4 weeks now. It only seems like yesterday we were being welcomed by the long red carpet and swarms of No. 9 middle school students lining up next to the carpet, our faces being displayed on a large TV screen in the front of the school. I can’t believe that next week is actually the last full week of teaching English classes. I feel like I’ve only now finally found a rhythm to my teaching and it is already coming to an end.

This week was the first week I felt that I had a comfortable idea of what I was going to do, how I was going to do it, and what would happen next. I guess you could say I had finally gotten accustomed to a stable daily routine. I’ve gotten used to the long 15 minute walk to school every morning under the blazing heat and the sweatiness and humidity of the non-air conditioned classrooms (I feel so bad for the kids when I’m not able to snag the rare air-conditioned room for my English class). Sometimes I don’t even notice how sticky my entire body is from perpetual sweating until I walk back home after the school day is over. I know which students shouldn’t sit next to each other, which students are my translators, and which students are the dark horses that understand most of what I say but are too shy to peep a sound in my class.

Now, let me tell you about some people I’ve met here that have made my Zhuhai experience ten times better.

First, there is Selina. Selina is my host sister: she’s a pretty and cute 7th grader that is quiet on the outside, but a giggly and fiery spirit on the inside. She is so talented because she can play the piano and sing beautifully at the same time, procure elegant Chinese calligraphy, and speak three languages (Chinese, Cantonese and Hakka, a provincial dialect). Her English is also pretty decent as she understands a good amount of what I say when I speak English at a normal pace. She enjoys watching Chinese dramas (I think one of them is called Shi Mei Ren), a Chinese variety show called “Supermom”, and various movies. We’ve watched “Life” (it’s a sci-fi thriller that made my host mom scream many times in the movie theater lol), the new “Beauty and the Beast” with Emma Watson in it, and the new Pirates of the Caribbean movie together. We also have the same taste in music so sometimes we spend evenings after dinner playing songs on the speaker via this trippy Chinese KTV app and singing along together. Her favorite Justin Bieber songs, “See You Again”, and “All of Me” are frequent song requests as well as some Ed Sheeran and Big Bang songs. It’s so cool to know that even though we have lived extremely different lives on opposite sides of the globe, but we’ve actually been listening to practically the same music playlist at the same time!

Then there are my English and singing class students. There’s Annie, who was my “Chinese-English translator” in my very first class, gives me tasty snacks after class, and gives me hearty hugs whenever she sees me in the hallway. There’s Susie and Michelle, who are both part of the broadcasting team at the school and taught me how to write some complicated Chinese characters. This week they even interviewed me for their English-time broadcast in the school in a cozy room full of monitors on the 5th floor, asking me questions about my life, America, and my experience here in Zhuhai. There’s Leo, who is this cute little boy that likes to sing and play Richard Clayderman songs on the piano, and believes that one day he is going to be shockingly tall (he’s going to be six feet one day okay). Then there’s York, who tells me that she believes I will achieve my dream of one day owning a panda zoo with hundreds of pandas and a rainbow bamboo garden.

My Duke Engage experience thus far has been much more than just teaching English and singing to middle school students. It has been about being immersed in an unfamiliar culture and environment, and building long-lasting relationships with unforgettable people such as my students and my host sister. How much they are willing to give and to develop their relationships with me surprise me more and more as the program goes on. I will stop here before I get any cheesier.