The urge for revenge is strong. The Old Testament proclaims that in the event of serious injury, the appropriate remedy is to demand “eye for eye, tooth for tooth,” (Exodus 21:24 NIV). Our criminal justice system is much the same. When a crime occurs, we ask ourselves questions like, “What law was broken? By whom? What is the prescribed punishment?” In an era of mass incarceration and the War on Drugs, it has become clear that this system is broken. The U.S. has less than 5% of the world’s population, but over 25% of its incarcerated population. And when 5.1 million drug-related arrests were made in 2016, 80% of which were for possession charges only, we ought to ask ourselves: Is this fixing the problem? Why are we doing this?

The general theory of punitive justice is that punishment is a deterrent to crime since people won’t want to suffer the consequences of an illegal act. But clearly this doesn’t follow since we have laws, but crime still exists. The problem is that this mindset never bothers to ask why crime happens in the first place. Restorative justice, by contrast, seeks to identify the harm that was done and repair it.

This process is much better at addressing issues of substance abuse, sexual assault, and mental illness because it focuses on supporting the person who was harmed and demanding accountability from the perpetrator. Under our current system, people are regularly jailed for addiction and mental illness without ever receiving the care that would alleviate these problems. The result is a brutal cycle of recidivism where the same individuals are punished over and over for the same “crime.” And seemingly small punishments have cascading consequences. Taking someone’s driver’s license away can cause them to lose their job, which causes them to lose their healthcare, and so on until the effective punishment is poverty.

Restorative justice isn’t perfect, but as we discuss ways to transform our systems of justice, policing, and community accountability, it’s a good place to start. We need a system that repairs the harm done, not one that makes it worse. 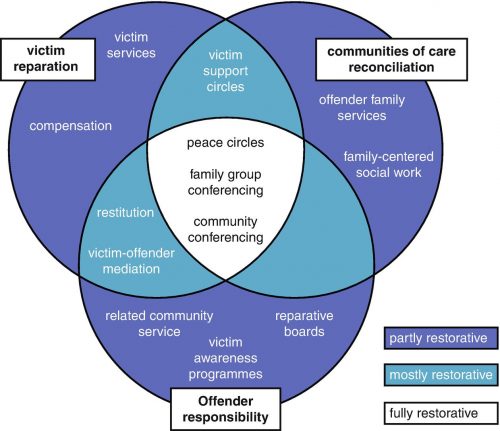