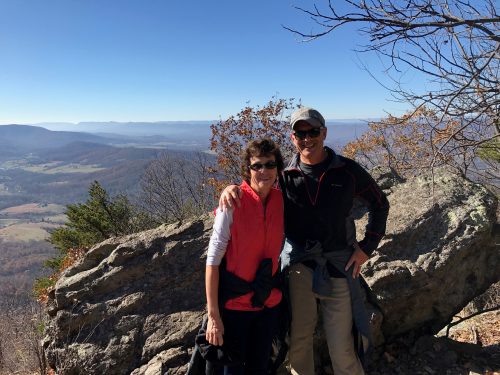 Rich Harris (R) not only found a passion for political science at Duke, he also found a partner to share his life. Harris met Ellen Wolf (E), an art history major, during work study in the cafeteria on East Campus. Since then, their connection to Duke has only deepened. Their son, Jeff, graduated in 2007 and is currently the director for Duke in DC and associate director of federal relations for Duke University. Like his parents, Jeff met his future spouse, Amanda ’08, at Duke. Ellen and Rich are also longtime supporters of Duke Libraries and avid Duke basketball fans.

They recently visited campus to see firsthand how their university has changed over the years. That trip—and a meeting with DukeEngage Executive Director Eric Mlyn—helped inspire their first gift to DukeEngage.

When and how did you hear about DukeEngage?

R: About eight or nine years ago, I was part of a team that was tasked with implementing a broad civic engagement program at Rutgers University. In doing research for that project, I found out about DukeEngage.

E: While I am not certain where I heard about DukeEngage first, it would not surprise me if our son, a recent Duke grad, did not mention it. Also, Philip Duhart, our regional development director, suggested we might be interested in looking at DukeEngage’s mission. We then read about DukeEngage online and learned about how Duke has changed. We tend to carry in our mind an image of Duke from 45 years ago, but that’s not Duke today. Reading about Duke online and then coming to campus, we discovered it’s more than just words on a webpage. It’s words that have been put into action to make a meaningful impact.

Does DukeEngage connect with your own life and experiences (personal or professional)? If so, how?

E: Growing up, I volunteered to help children with reading, writing, and math. When I was at Duke, I did volunteer work in the community with foster children. Since then, I’ve worked with nonprofit organizations such as the United Way. I’m now on the Philadelphia Zoo board, and the Stakeholder Engagement Committee on which I serve has as a focus community engagement. Volunteering has been important to me since Duke and continued to be important when I entered the business world and now that I am retired.

R: As a political science professor at Rutgers, I taught a course called “The Socially Responsible University.” I had seven students in the class, and we partnered with six different organizations in Camden, New Jersey. The classes took place on campus and in the community. Watching the interaction between students and local residents was really powerful for me—especially seeing how they navigated their preconceptions of one another. I saw how getting people from very different places in a room together and working on projects together can have tremendous positive impact on both parties.

What inspired you to make a gift DukeEngage?

R: During our Duke visit in January, Ellen and I had a long conversation with Eric Mlyn, the Peter Lange Executive Director of DukeEngage, and things just seemed to fall into place. DukeEngage and Eric are thinking about one of the areas we are very interested in, which is how to address the growing disconnect and polarization in society. As opposed to talking to people in their own circles or silos about others, how do we actually engage with others? And that seems to be what DukeEngage is all about.

E: Richard and I also looked at the DukeEngage mission and felt that it matched very closely with what we wanted to accomplish with our philanthropy. We want to help transform the way students think—to help them be more open and more understanding of differences and to broaden their horizons. DukeEngage gives students a chance to reach across cultures and ideologies to expand their own knowledge, and hopefully to expand the knowledge of those they’ve reached across to.

R: The evaluation that DukeEngage does is also very impressive to us. Instead of just looking at the inputs, DukeEngage uses data and feedback to learn and improve.

E: DukeEngage is not a stagnant organization. It’s constantly looking to change and improve. DukeEngage is open to new ideas and willing to redirect as times changes.

In what ways do you hope your financial support will make an impact on Duke undergraduates?

E: I see two groups of people being impacted: the individuals whom DukeEngage students work with outside of the Duke community and the DukeEngage students themselves. I hope both groups will learn from each other. I hope they come away seeing things in a different light or with a new perspective, and have the ability to digest and process whatever that is. I also hope that DukeEngage can help change any negative perceptions about Duke.

R: After these experiences, I hope students can say, “I was in a small town—in New England or the South or wherever—and I met people I disagree with strongly. But they’re decent people trying to make a living, raise kids, and live their lives as best as they can.” I hope students can come away with a sense of our common humanity.

If you could participate in any DukeEngage program, which would you choose?

R: I’d choose a program on community development and outreach.