Yesterday, I was taken to a youth drag showcase at a small café blocks away from where we live. Upon arrival, I found an incredibly small room filled to the brim with seats. With an outdoor temperature of 106 degrees, I was already picturing the sauna that would ensue once others would start to fill it. Within the half hour, I found myself fanning my face in the back corner, enraptured by young poets talking about their lives. A passage on the older sister that hopes her siblings will bleed brown when they write, to never sway from her roots and ancestors. Another poet spoke about her younger brother, who channels his confusion into anger and exhibits a refusal to learn from his mistakes; to her, these appear to be the markers of the machismo seen so often in early adulthood. Their words stung with brutal honesty, an echoing familiarity of the shared dreams of our generation. Love. Equality. The room snapped and clapped, hanging onto every line.

The mic soon closed, and was picked up by Apple, the host of the night’s youth drag showcase. Her charisma instantly filled what few gaps were between the seats as she opened with the first drag number of the night. Booming speakers and rainbow lights competed with the crowd’s noise for the entire song. Performers as young as 14 walked up and down the aisle and hit their poses as my voice began to weaken from cheering so loudly. I felt so fortunate to be part of a space filled with encouragement and praise for those brave enough to display their sexual identities onstage with this art form. In most places, drag is confined to 21-and-over nightclubs, limiting the ability for youth to watch and perform. In addition, it limits the mentor-student relationships that arise with drag. With the creation of these showcases, youth can participate and thrive within spaces that cannot be found in many parts of our society – at an age when their sexual identities are beginning to take form and are vulnerable to the judgement of their peers. 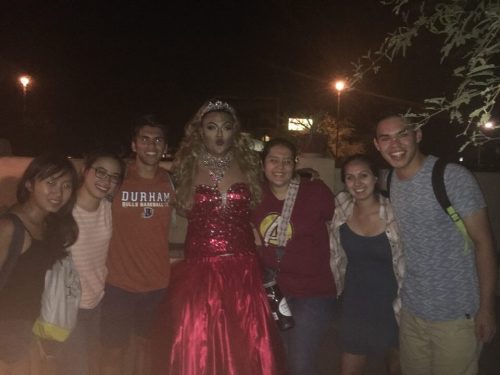 Our group with performer IG: el_morro_alvarez

When news articles are inundated with LGBTQ members fighting for the most basic of rights, from child care to buying flowers, it was truly refreshing to see an event in which everyone simply accepted and cared for the well being of others.

It’s all about creating space and accepting everyone within that space. And with so many populations here in Tucson, such spaces do not always extend past organizations and events directly dealing with marginalized communities.

Two weeks ago, Ethan and I ended up at a meeting for Todo Tucson, a community member initiative fighting for municipal IDs within the city. The hope is for the city to issue a form of documentation that will be accepted by government officials and law enforcement. We have been placed on a research team with two other college students, acquiring as much information as we can on IDs in other cities and states: what the IDs can do, who accepts them, who issues them, costs, privacy of information, and so on. With enough leg work from the community end, we could convince the city’s government officials on the importance of documentation for Tucson’s residents, despite their documentation status on the national level.

It’s all about creating space and accepting everyone within that space, no matter where their differences and marginalized identities may lie. Whether it be drag shows on a Friday night or community organizing within a church, we can always involve ourselves in an initiative that aims to include even more people within our social space.