“DukeEngage’s immersive service programs provide students and faculty with opportunities to challenge themselves, expand their perspectives, and make a tangible difference in the world. I am thrilled to help DukeEngage celebrate ten years of service to society, and grateful to the leaders, partners, and supporters who make this transformative program possible.” 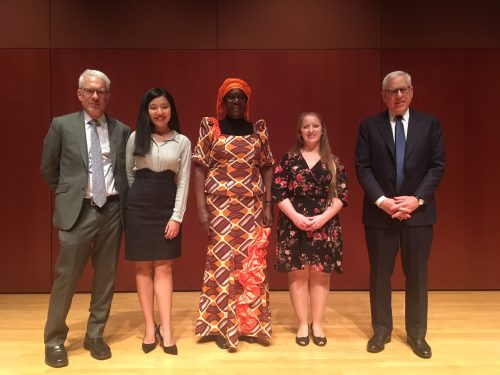 On November 29, 2017, more than 170 DukeEngage alumni, leaders, community partners, staff, and supporters gathered with Duke University leadership at the Nasher Museum of Art to celebrate a tremendous milestone: a decade of DukeEngage.

David Rubenstein ’70, chair emeritus of the Duke University Board of Trustees, opened the evening by thanking guests for attending from as far as China and as near as Chapel Hill. He highlighted the many milestones of DukeEngage—4,000 students, 79 countries, 37 U.S. cities, and more than 1.25 million hours off service—while also noting the growing awareness of the program. “As I’ve traveled around the world in my business career, it used to be the case that people always talked to me about Duke basketball,” said Rubenstein. “In the last few years, actually, I’ve had a lot of people come up to me—maybe even more than basketball—to talk about DukeEngage.”

Dorcas Oyugi, prinicpal of the WISER Girls School, spoke about the impact DukeEngage students have had on her community of Muhuru Bay, Kenya, and Madelaine Katz ’16 shared how participating in DukeEngage-Kenya influenced her academic and career paths. In fact, Katz will be returning to Muhuru Bay for her third consecutive summer, this time as a site coordinator for DukeEngage-WISER.

Kangdeng “Kally” Zhao first encountered DukeEngage in 2010 when she was a student at Middle School No.9 in Zhuhai, China, where DukeEngagers teach art and English classes each summer. The connections she made with DukeEngage students inspired her to apply to New York University, where she is now a sophomore studying communications. Zhao credits her interaction with Duke undergraduates and the DukeEngage-Zhuhai program leader, Professor Hsaio-Mei Ku, with helping her “realize what the possibilities could be” for her own future.

Eric Mlyn, the Peter Lange Executive Director of DukeEngage, concluded the program with these inspirational words: “It is more important now than ever that [universities] show the real relevance of what we do, in a whole variety of ways, and how we contribute to serving and healing the world. Our work is more important than it was ten years ago.”

Photos from the 10th Celebration