Skip to main content
2/19/21 - We've launched! Check out the website for program information, information sessions, and stories from past participants. Please note that as Duke-supported undergraduate summer travel (global and domestic) has been suspended, all 2021 DukeEngage projects will take place virtually. Applications due at midnight on March 7th, ET.

I am a compartmentalizer. To cope with the daily stressors of being a young adult and the anxieties commonplace with being a college student, I separate key facets of my life into distinct categories: academics, extracurriculars, and my social life. On a more macro scale, my life can currently be divided into three categories: my family, my hometown, and Duke.

A stark difference between these three are the political ideologies that build their foundations. For the entirety of my life, I have been enclosed within vastly different but similarly rigid bubbles. Because of this, I’d always struggled navigating the realm of politics and even more so, how to engage in political conversations. With a population of 23,356, the county in Eastern Kentucky that I call home is extremely conservative. Nestled in the middle of the Bible Belt of the United States, many of the political beliefs that people held were rooted in religion. Those in my community were unwavering and vocal in their beliefs. While I believe that this, citizens who are invested and who care, is vital for a democracy, it cultivated my tendency to shut out the other side. I, along with my family, hold vastly different views than the rest of the members of my hometown and it was extremely difficult being encapsulated in a bubble with them. Sharply juxtaposing that realm is Duke University, where most students and professors are left-leaning. Again, these people are steadfast in their beliefs and passionate in advocating for what they believe is moral and just. 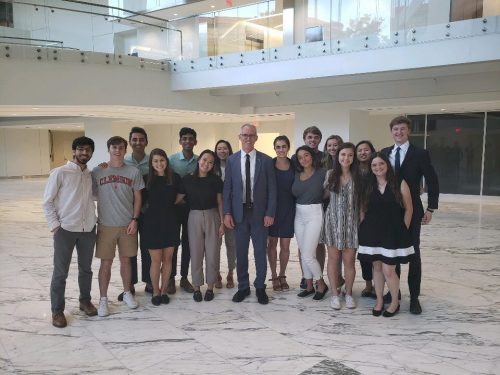 Our recent programming has consisted of more one-on-one discussions with current and former congressional staffers and members. These include former Representative Bob Inglis, Paul Teller and Mark McClellan; all of whom are registered Republicans. Representative Inglis, who was mentioned in the film Merchants of Doubt that we had watched during our first few weeks in D.C., recollected his experiences crossing party lines on the issue of climate change and discussed the conditions needed to facilitate bipartisanship. Paul Teller, Special Assistant to the President for Legislative Affairs, spoke about how he maintains relationships and networks across the aisle. Our conversation with Mark McClellan was centered around the current state of health care policy and, in my opinion, bipartisan.

Although this wasn’t intentional, I appreciate these opportunities that have allowed me to escape the echo chambers I’ve often found myself in. While it is nice to be surrounded by people who share and reinforce your beliefs – with the alternative being quite unpleasant – these bubbles create political climates that prevent meaningful and respectful dialogue. A theme that has been weaved throughout our discussions this summer is the importance of stepping back and into the lived experience of the people we are interacting with. Narratives are extremely important in understanding the multitude of ways that political and personal ideologies can manifest. While I still hold implicit biases resulting from my own experiences, these conversations have made me re-evaluate how I want to engage with politics in the future.